You can taste traditional culinary not only at roadside stalls. You can also enjoy traditional food with a more modern and luxurious packaging at a restaurant and cafe. One of the places to eat in Bali that offers a culinary experience like this is the Batan Waru Ubud Cafe. In this place, you will find culinary offerings served by professional chefs.

The Batan Waru Cafe always tries to bring a luxurious feel to the traditional culinary offerings they provide. The dining atmosphere they provide also ensures that visitors can enjoy the authentic Indonesian culinary in a different way. Moreover, this cafe is located in Ubud which is known as an area with natural nuances and is a favorite of tourists.

Modern and Luxury Impression at The Batan Waru Ubud Cafe

This cafe deliberately carries the theme of a modern room, far from being traditional. They do this in order to raise the unique culinary value of the archipelago that they offer. It's no wonder that when you step into the Batan Waru Cafe room, the atmosphere will be much different from a street stall.

The slum impression will be far from the atmosphere in the cafe. In fact, you will find a modern room that is not inferior to other cafes. You can also find several selfie spots that can be used as photo locations. Cleanliness is maintained, making expatriates or foreign tourists often choose to relax at this cafe.

The facilities that you can use while dining at the Batan Waru Cafe are also complete. You don't need to be confused looking for a parking area when coming with a private vehicle. There are also facilities in the form of WiFi internet access that can be used for free. Not to forget, the cafe also provides payment services in various ways, both cash and credit card. 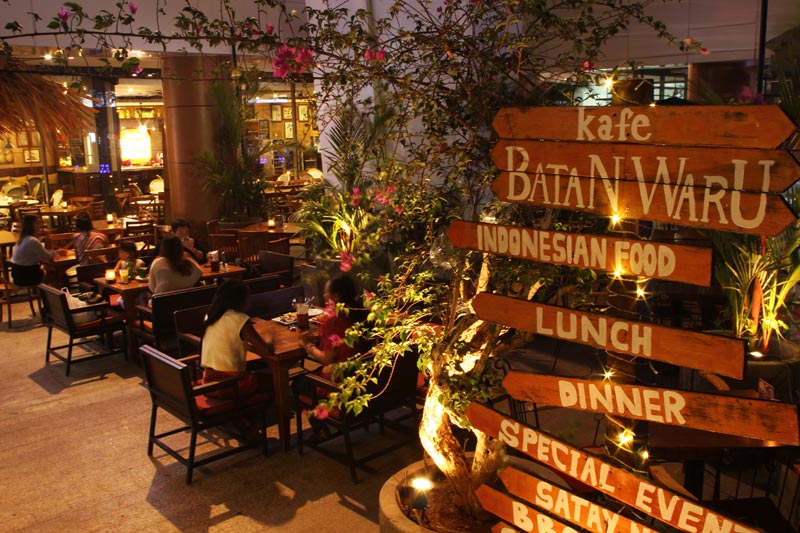 The menus that you can order at the Batan Waru Cafe is not only limited to traditional Balinese menus. The cafe manager deliberately provides traditional food that comes from various cities in the country. The menu variations that you can find here are also very diverse. You can choose a delicious row menu when you want to enjoy breakfast, lunch, or dinner.

You can find a variety of traditional snacks that are usually found on the roadside. Snacks in the form of tofu that are often found in East Java, tofu, martabak, or brains. You can get these menus by spending less than IDR 50,000 per portion. In addition, there are also menus with larger portions if you want to feel full.

The main menu that can be found at the Batan Waru Cafe is also very complete. You can taste the culinary specialties of Bali. Batan Waru mixed rice can be a special dish that you find at Batan Waru Café. In addition, you can also find various types of satay, including chicken satay, pork satay, beef satay, and so on. The price of the main menu ranges from IDR 80.000 to IDR 150.000.

A cafe with a traditional menu with luxurious and modern nuances that you can find is located at the address Jl. Dewi Sita, Ubud. The location of this cafe is very strategic, close to various culinary centers and famous dining places in Ubud, including Earth Cafe and Market Ubud, Warung Dayu, or Warung Siam Ubud.

There are things you need to see if you want to eat here. This place is always crowded with visitors. To anticipate the crowd, there's nothing wrong if you make a reservation first. In addition, you can also enjoy a similar dish with a visit to the Batan Waru Cafe in Kuta.