Goa Gajah Ubud Temple is indeed one of the oldest rows of temples on the island of Bali. Not only that, Goa Gajah Temple is also worthy of being called one of the temples with the most phenomenal design on the Island of the Gods. Moreover, this temple also has a high historical value in Bali.

Goa Gajah Temple does have a unique shape, and is very much different when compared to other temples on the island of Bali. As the name implies, Goa Gajah Temple has a shape like a cave. Because of its uniqueness, UNESCO has included Goa Gajah as one of the tentative lists of world heritage sites that must be protected.

With its unique architectural form, it is not surprising that Goa Gajah Bali Temple has become a successful destination in attracting the attention of many tourists. Visitors can explore the temple complex which consists of two main areas. The first area is located in the north which is the location of the inheritance of Shiva's teachings. This is evidenced by the existence of statues of Ganesha and Trilingga. This area is also a place of worship for Hindus on the island of Bali.

Getting to know the Bali area, Goa Gajah Ubud

While the second area which is located in the south is a place of worship for Buddhists. The area known as Tukad Pangkung has a Buddhist stupa with the attitude of Dhyani Buddha Amitabha. This stupa is a three-pronged stupa made with carvings on stone walls. 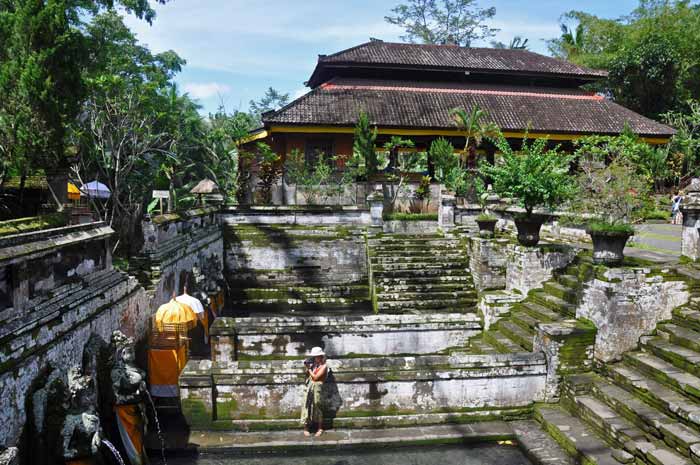 In addition, at the front of the temple there are also several statues such as the Hariti statue, the Ganesha statue and the Giant statue. There is also a sacred bathing pool discovered by J.L Krijgman which can now be witnessed directly by tourists. In this holy bathing pool there are two statues, namely the WIdyadara and Widyadhari statues.

Getting to Know the History of Goa gajah Ubud

This cave is known as one of the temples that have a very high historical value on the island of Bali. Goa Gajah Temple was a sacred location for Balinese Hindus and Buddhists during the reign of the Warmadewa Dynasty. The Warmadewa dynasty is known to have ruled the Island of the Gods in the 10th to 11th centuries AD.

The existence of Goa Gajah Bali Temple is also recorded in several inscriptions. However, there are no inscriptions that clearly refer to this place as Goa Gajah Temple. The Supplementary Songan Inscription and the Cempaga Inscription refer to this temple as Er Gajah. Furthermore, the Pandak Badung Inscription calls this place the name Antarakunjarapadda. In addition, there is also the Negarakertagama book in 1365 AD which lists the names of the predecessors of Ba and Lwa Gajah in Bali as Majapahit's territory.